Expand all | Collapse all | Edit page 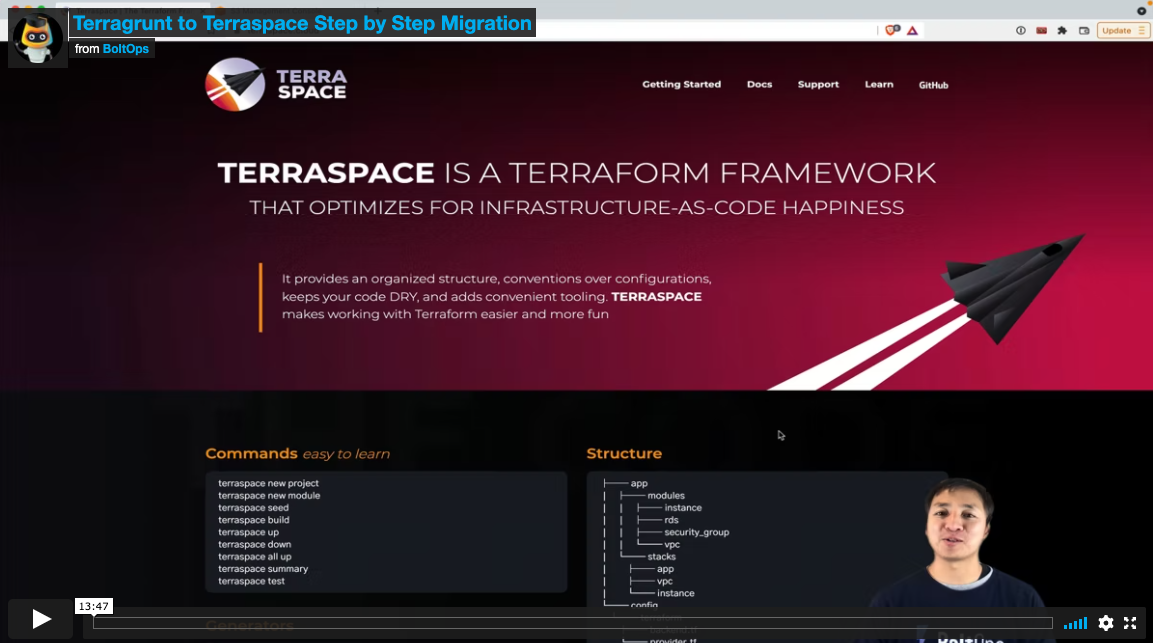 Given the relatively young phase of the DevOps space, tools like Terragrunt have done a fantastic job. It makes life easier and better. You don’t have to build it yourself. It’s smart to use these types of tools.

Next, we’ll talk about the differences between Terragrunt and Terraspace in more detail.

Though both Terragrunt and Terraspace dynamically generate Terraform projects, their approaches are different. Terragrunt does an excellent job of keeping your module code DRY, but it leaves little to be desired for the terragrunt.hcl files.

With Terraspace, Terraform projects are dynamically generated in a centralized manner. Terraspace processes things in a single clear direction. This reduces or outright eliminates the duplication. For example, the state file management is controlled at single place with config/terraform/backend.tf.

This also leads to DRYer thinking about the commands themselves. Here’s an explanation:

With terragrunt, you cd into the folder with the terragrunt.hcl and run the apply command:

With Terraspace, you stay at the root of the project and run the up command:

You don’t have to jump around to different folders. You think about things in a centralized fashion.

Terrapace leverages tfvars files and allows you to compose multiple tfvars together in a DRY way. This is called Terraspace Layering. Layering makes it easy to use the same code to deploy and create multiple environments and even go multi-regional. No extra configuration structure and duplication is needed. Here’s an example:

With Terragrunt, you must duplicate the terragrunt.hcl files . Terraspace Variables Layering handles things in a DRYer fashion.

Both tools provide the ability to deploy all of your stacks with a single command. It’s a wonderfully powerful feature. Just the minimal ability alone is not enough, though. How friendly it is to use also matters.

With Terragrunt, the terragrunt apply-all full output from the multiple terraform apply processes is printed out to your terminal in one big stream. It makes it difficult to see what’s going on.

With Terraspace, the terraspace all up output is a reduced-noise summary. The full detailed logs from each terraspace up is also written to files for further inspection. It’s designed for humans.

With Terraspace, you instead define the dependencies in tfvars files. The separation from the HCL code makes it mentally clear that the dependency definitions are decoupled. This further encourages more module composition and reusability.

Docs: Deploy All and terraspace logs.

With both tools, you can use a single command to deploy multiple stacks.

With Terragrunt, you cd into the top-level folder with all the subfolders you want to deploy and run:

With Terraspace, you have more power to selectively choose what to deploy within an environment. To deploy everything:

To choose which infrastructure stacks to deploy. Simply provide the stack names. Here’s an example targetting the b2 and b3 stacks only. 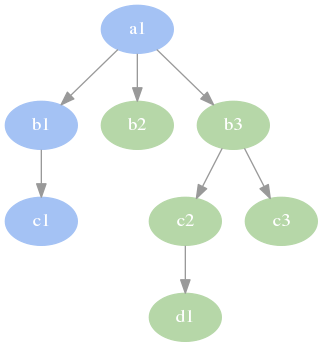 The subgraph stacks, represented by green nodes, will be deployed. A summarized preview is provided.

Terraspace’s deploy all ability is more friendly, flexible, and powerful.

Terragrunt allows you to use different modules by specifying the remote source directly in your HCL code. Here’s an example:

Though, Terragrunt supports all cloud providers, it is focused on AWS. For example, it doesn’t automatically create backend buckets for Azure. With Terraspace, the 3 major cloud providers are better supported: aws, azure, google. There are also easy and gentle learning guides for each of them:

Terraspace can automatically set up the workspace GitHub connection and set terraform and environment cloud variables. It simply automates as much as it can. This saves you hours manually creating the workspaces, which is also error-prone.

Your time is precious. Why are we copying and pasting boilerplate structure in this day and age?

Terraspace provides generators to help you get going right away. There are generators for projects, stacks, modules, tests, shims, git hooks, even plugins creation.

Terragrunt does not have generators.

For testing, Terragrunt uses a separate library call Terratest. Terraspace integrates the rspec-terraspace library straight into Terraspace as part of it’s Test Framework. The test framework allows you to use a language for testing that is readable and clear: Ruby and Rspec. Terraspace actually dogfoods itself by using its own test framework. All 3 major cloud providers are tested before a new release: aws, azure, google. We’re talking with about testing with real resources.

The Power of Ruby

Though language shouldn’t matter, it does. Most modern-day DevOps shops use a variety of tools like Bash, Python, Ruby, and Go to achieve their goals. For example, vagrant is written in Ruby and the aws cli is written in Python. Ruby is actually one of the reasons for Terraspace’s superpowers and gives it many advantages.

Interestingly, the fact that Ruby is used is generally transparent to the end-user. The starter learning guides all take you through a gentle path, where you are using Terraform HCL just like you usually would. That’s the power of using the right tool for the right job. Most of the time, you don’t even realize it. All you mainly see is that things are getting done.

With Terragrunt, you can configure things with your folder structure, CLI flags, and hooks. You can do all of those same things with Terraspace, but you can also configure core framework settings directly.

You can set an abundant number of framework settings and behaviors. There are more than 20 settings listed on the config reference docs. And these are only the core framework settings we’re talking about here. If we add settings for the Terraspace provider plugins, CLI hooks, and Customizable Args, which are also configurable, the list grows even longer. Terraspace provides reasonable defaults, but it’s very configurable in case you need more control.

We cover plenty of differences between Terraspace and Terragrunt here. Overall, the two are quite different tools. At the end of the day, Terraspace is a full-fledged framework. Whereas, Terragrunt is a thin wrapper. We’re really comparing apples to oranges here.

At this point, if you’re still wondering what’s right for you. Think that theorizing will only get you so far. Building a small test proof-of-concept project with each tool is sometimes the fastest path to reaching a decision. Go out there and start building! A good place to start is the Terraspace Getting Started Guides.

For another similar comparison, check out this blog post: Terraform vs Terragrunt vs Terraspace